Do we ignore the Old Law so we can be free to live as we wish in the New Covenant? What about Christian Sabbath keeping? What does the Bible really say? 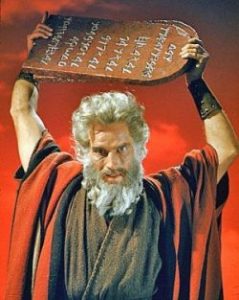 First let’s start off with an overview.

Here’s what Paul says in 2 Cor. 3:7 about the Ten Commandments, which were carved in stone:

Now if the ministry that brought death, which was engraved in letters on stone ….

When the Lord finished speaking to Moses on Mount Sinai, he gave him the two tablets of the Testimony, the tablets of stone inscribed by the finger of God.

And he wrote on the tablets the words of the covenant—the Ten Commandments.

Yes, Paul says in 2 Cor. 3:7-18 that the Old Law has a certain level of glory, but it is fading. Those verses in 2 Cor. 3 provide a stark contrast between the two ways: life in Christ through the Spirit in the New Covenant v. life under the fading Law of Moses in the Old Sinai Covenant.

So why was he so dismissive of the Big Ten? They came in the context of the Sinai Covenant (Ex. 19), and then they were thundered from on high in Ex. 20. This covenant comes with wrath and death and curses for disobedience. In short, Paul, the ex-Pharisee, was eager to free Christians from that covenant (see, e.g., Gal. 4:21-31.)

After that overview, let’s get into some specifics.

The New Covenant Scriptures offers a better way. They free people from observing the Fourth Commandment and backed up by the death penalty. Specifically,  Paul liberates the conscience by saying one man holds a day special, while another does not:

So if a Messianic Jew wants to keep the Sabbath freely, he is certainly allowed. If someone else (or the Messianic Jew) does not want to keep it, then he is free to follow his conscience educated by Scripture. He no longer lives under command and threat of death. Freedom of conscience in Christ. The better way. (This is different from regular church attendance, which must be done; some larger churches hold services during the week, for convenience, and even here sometimes people miss on occasion, and that’s okay.)

The point is that moral law is not optional. Old covenant rituals are optional.

8 … For he who loves his fellowman has fulfilled the law. 9 The commandments, “Do not commit adultery,” “Do not murder,” “Do not steal,” “Do not covet,” and whatever other commandment there may be, are summed up in this one rule: “Love your neighbor as yourself.” 10 Love does no harm to its neighbor. Therefore love is the fulfillment of the law. (Rom 13:8-10)

So if the New Covenant community of believers allows the divine love of God to flow through them, they do not have to focus on and keep the Ten Commandments by the force of their wills. They can fulfill the commands by God’s love.

When Christ saves us and we live in the Spirit, the law can be fulfilled in us.

3 For what the law was powerless to do because it was weakened by the flesh, God did by sending his own Son in the likeness of sinful flesh to be a sin offering. And so he condemned sin in the flesh, 4 in order that the righteous requirement of the law might be fully met in us, who do not live according to the flesh but according to the Spirit. (Rom. 8:3-4)

The main point is that God declares us righteous in Christ, and then we walk in the Spirit who helps us obey the moral law outside of the Old Sinai Covenant (though the moral law in its Scriptures).

Loving the Lord with all one’s heart and soul covers the First Commandment not to have other gods before God. (This is a vertical or God-directed Commandment.)

Now what about the Second Commandment that says not to make images in the form of anything in heaven, earth, or water (meaning, all-encompassing)? Yes, the Commandment comes in the context of actually worshiping pagan gods, but does it restrict or even forbid great art and sculptures today and throughout the Western history and even the world?

Maybe the best answer is modeled on Sabbath keeping. Each one should follow his or her conscience. If we walk in the Spirit, we can do great art. We don’t worship or venerate it from a sinful nature, but enjoy it.

In that light, life in the Spirit means we do not gratify our sinful impulses, yet we are not under the law, as seen in the next verse.

Note the last clause in v. 18. The “law” in Paul’s writing almost—almost—always refers to the Torah, and the pinnacle of that law is believed to be the Ten Commandments.

Finally, here is the positive outworking of life in the Spirit apart from the law:

22 But the fruit of the Spirit is love, joy, peace, patience, kindness, goodness, faithfulness, 23 gentleness and self-control. Against such things there is no law. (Gal. 5:22-23)

Again in the last clause, Paul tells the believer to live in the Spirit and rise above the Old Law.

Many verses could supplement this study, but the most famous is in Rom. 3:21-31, which says righteousness comes through faith in Christ, not by keeping the law.

So do Christians have to ‘keep’ the Ten Commandments?

Let’s begin with saying that the ritual command of Sabbath keeping can be followed or not, according to one’s conscience. And the same goes for drawing, painting and sculpting (image making).

Here’s the direct answer to the question.

… if they keep them in the context of the (now obsolete) Sinai Covenant, when and where they were originally delivered.

… if they anxiously follow a list of negative commands (all of them except honoring parents have a “not” in them. “Thou shalt not!”).

… if they attach punishments to them, like the death penalty or flogging, for disobeying them. (In today’s world that works out to “If I don’t keep them, God and the church will punish and reject me!”)

… if they try to keep them out of their own will power and self-discipline.

… but if and only if they fulfill these two conditions:

(1) They live in God’s love and let it flow through them towards their neighbors and back to God himself.

(2) They walk in the Holy Spirit, so that the fruit of the Spirit grows and flows daily, which at the same time weakens the power of their sin nature.

So how does this post help me grow in my knowledge of God and relationship with Christ?

And they can receive instant forgiveness when they obey their sin nature and break them (e.g adultery), without fear of punishment from a ‘vengeful’ God.

It all begins with God’s love and grace in the first place.

The whole issue is answered through new life in Christ within the never-obsolete, eternal New Covenant.

What Does the New Covenant Retain from the Old?