Two natures (deity and humanity) are united in one person—the person of Jesus Christ. Let’s use the Q & A format, for clarity and conciseness.

As noted in the other posts in this series, theologians have to work out how these verses (and many others) fit together.

That is my translation. HT: Lidija Novakovic, Philippians: A Handbook of the Greek Text [Baylor UP, 2020]. If you would like to see the verses in many translations and in context, please go to biblegateway.com.

4. Do I Really Know Jesus? He Took the Form of a Servant

And Col. 2:9 indicates the fullness of Deity lives in bodily form, now in heaven and while he was on earth:

For in Christ all the fullness of the Deity lives in bodily form.

The Word became flesh and made his dwelling among us. We have seen his glory, the glory of the one and only Son, who came from the Father, full of grace and truth.

As I write in every post in this series, professional theologians use biblical logic to sort out this proposition:

How exactly was he the God-man at his incarnation and during his ministry?

Don’t feel frustrated if you don’t get this at first and you have to read it several times. Sooner or later, things will “click.” It’s a profound mystery, after all!

The NIV is used here. If you would like to see the following verses in many translations and in their contexts, please go to biblegateway.com.

Let’s begin this summary post, borrowing heavily from the first six articles in the series.

1.. What is a more formal definition of the hypostatic union?

Two natures united in one person is called the hypostatic union, or one-person union.

Here is one from the Evangelical Dictionary of Theology:

… The union of two natures (duo physeis) of deity and humanity in the one hypostasis or person of Jesus Christ. In the incarnation of the Son of God, a human nature was inseparably united forever with the divine nature, yet with the two natures remaining distinct, whole, and unchanged, without mixture or confusion, so that the one person, Jesus Christ, is truly God and truly human (p. 410).

That definition is based on the Creed of Chalcedon in 451 AD. The three major branches of the church, with almost all of their subdivisions or denominations, believe it: Protestant, Catholic, and Eastern Orthodox.

That question has been answered in this post: 1. Two Natures in One Person: Key Terms and Concepts

3.. What does the word nature mean?

That term has been answered in this post: 1. Two Natures in One Person: Key Terms and Concepts

4.. If Jesus is truly human, did he have a sin nature?

No, because man with a sin nature is not truly human; he is less than that. Man is degraded in his essence, because it is tainted by sin.

5.. Was Jesus able to sin while he was in his body?

The theologians I read (a fair number of them) say non posse peccare: “unable to sin.” His divine nature, which he took with him from heaven, made it not possible for him to sin.

However, the dominant message of the four Gospels is that on a daily basis he achieved victory over temptation to sin by his connection to his Father and by the power of the Spirit.

Therefore he is an example to us.

6.. Is there an illustration to clarify the hypostatic union–two natures united in one person?

The first illustrates how one person can have the physical and nonphysical and yet remain one person. We humans are soul and matter.

My body moves and types these words—my fingers and hands (material) type them, but the mind (immaterial) is also involved. I don’t say that my fingers or toes had nothing to do with it, or my mind typed it. Instead we simply affirm that I did that. Matter and soul did this together, but they are distinct. Yet one person—body and soul—did it.

As Renewal theologian J. Rodman William insightfully says, “One possible help in understanding this paradox [of two natures in one person] is to reflect on the operation of God’s grace in a Christian’s life” (p. 344). 2 Pet. 1:4 says that we “partake of the divine nature.” So now the born-again believer has two natures—human and divine.

Of course the illustration is imperfect (Millard Erickson notes its limitations, p. 669), because our human nature is tainted with sin, and we received a divine nature at one point in time. Jesus, on the other hand, never received his fully divine nature, for he always had in eternity past. And his human nature was not tainted with sin. But it illustrates two natures living in one person—you.

7.. Are the two natures united in one person forever?

Yes, right now Christ has those two natures, and even a body, but on his resurrection it has been transformed into an immortal, incorruptible body that lives forever. One can see the nail wounds or scars in his hands and feet, but his body will never decompose, but will go on forever—ours too, after meet him at his second coming.

8.. Isn’t all this just made up by the later church and unintelligible?

Jesus Christ is the one and only, unique person whoever walked the globe, for he was the theanthropos—the God-man. It is a profound mystery, and a mystery is not irrational.

It is not unintelligible; maybe we’re just unintelligent—not intelligent enough. As noted at Question 5, we have the divine nature living in us, so the whole thing may not be clear in its details, but it is not beyond our experience.

And as noted, Scripture everywhere affirms his full humanity and his full divinity. We ignore those verses to our doctrinal peril. At the Chalcedonian Council, the creed which the councilors produced summarized all those verses into one succinct document. There is nothing wrong with writing up a creed.

See this post that has Scriptures revealing his human nature and divine nature:

2. Two Natures in One Person: He Was Human and God

9.. Is there an image that can clarify the hypostatic union? 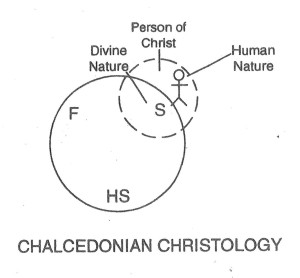 It shows God (Father, Son, and Holy Spirit) in the one big circle–that’s monotheism. The person of Christ (dotted circle) has two natures: Human (stick figure), which is outside the “God Circle,” and the divine, which is inside the “God Circle.” Two natures (human and divine) in one person, Jesus the Son.

With the human nature outside of the “God Circle” it is easy to understand why the people of Jesus’ time, who saw him in person, and modern scholars see only his human nature and miss his divine nature—the human nature is most visible to them.

10.. Can you show how the two natures worked in the one person of Jesus the Messiah?

In his human nature he ascended into heaven (John 16:28 and Acts 1:9-11), but in his divine nature he was everywhere present (Matt. 18:20 and 28:20; John 14:23). Both things are true about the person of Christ. So it is correct to say “Jesus returned to heaven, and Jesus is here with us right now.” The first is true of his human nature, and the second is true of his divine nature—two natures contained in his one person named Jesus.

Jesus was about thirty years old when he began his ministry (Luke 3:23) in his human nature, but he eternally existed in his divine nature (John 1:1-2; 8:58). Both are true about the person of Jesus. So it is correct to say, “Jesus began his ministry at about thirty, and Jesus existed from eternity past.” The first is true of his human nature, the second is true of his divine nature—two natures contained in his one person called Jesus.

When Jesus was a baby in the cradle, did he hold the universe together (Col. 1:17) and sustain it by the word of his power (Heb. 1:3)? His human nature could not do that, but his divine nature could and did. Each nature did what was unique to itself. So it is correct to say, “In his (baby) human nature he did not do that, but in his divine nature he did.” Either way, it is correct to say that Jesus always held up the universe.

The reader already understands where this is going in respect to God “dying” at Jesus’s crucifixion.

11.. Was his divine nature hidden during his earthly ministry?

Mostly yes, because Jesus had two wills, divine and human. He surrendered both to his Father in heaven, who told him to live like a man in every way possible, yet without sin. However, by his Father’s permission, sometimes his divine nature burst forth in miracles like calming the storm, walking on water, at his baptism when the Father, Son and Holy Spirit appeared or made their presence known (Matt. 3:16-17), or at the Mount of Transfiguration, when he shone in glory (Matt. 17:1-5).

Some theologians say that one nature does one thing that the other nature does not. So the miracles were performed by the divine nature, not his human nature.

However, he was also anointed by the Spirit, and worked miracles through the Spirit. So now we see the Trinity working through Jesus. The Father took the lead. Jesus surrendered and submitted his divine attributes to him. This idea is expressed in verses like these:

Perhaps the most important verse about miracles and surrender: “I have shown you many miracles from the Father” (John 10:32).

12.. Why did the Father tell him to live like a man (but without sin)?

Heb. 4:15 answers it: “For we do not have a high priest unable to empathize with our weaknesses, but we have one who has been tempted in every way, just as we are—yet without sin.”

In other words, the Father sent his Son to redeem the world and show us the Father empathizes with human suffering. That’s how much he loves us.

8. Do I Really Know Jesus? He Was Sinless

So how can I get to know Jesus more deeply?

You now have clarity. He is two natures (divine and human) in one person.

Wayne Grudem summarizes this wonderful doctrine of the hypostatic union:

At the end of this long discussion, it may be easy for us to lose sight of what is actually taught in Scripture. It is by far the most astounding miracle of the entire Bible—far more amazing than the resurrection and more amazing than the creation of the universe. The fact that the infinite, omnipotent, eternal Son of God could become man and join himself to a human nature forever, so that infinite God became one person with finite man, will remain for eternity the most profound miracle and the most mystery in all the universe. (p. 563)

This doctrine goes right to our salvation and our eternal life and our relation with the Father, the Son, and the Holy Spirit.

ARTICLES IN THE “TWO NATURES IN ONE PERSON” SERIES

1. Two Natures in One Person: Key Terms and Concepts

2. Two Natures in One Person: He Was Human and God (Scriptures in Part 2)

3. Two Natures in One Person: Basic Questions and Answers

5. Two Natures in One Person: If Jesus Got Hungry, Did God?

6. Two Natures in One Person: Definition or Creed of Chalcedon

7. Two Natures in One Person: Review and Conclusion