Rufus means “red,” which indicates his complexion. This nickname distinguishes him from his father William I, the Conqueror. He ruled from 1087-1100. The most widely known fact about Rufus is his death under suspicious circumstances, while he was hunting. Accident or murder?

Let’s get started with his ancestry. Here are the Anglo-Normans all the way to Henry II, the first Plantagenet, from C. Warren Hollister’s Henry I (Yale English Monarchs series):

The next table is by W. L. Warren, Henry II: 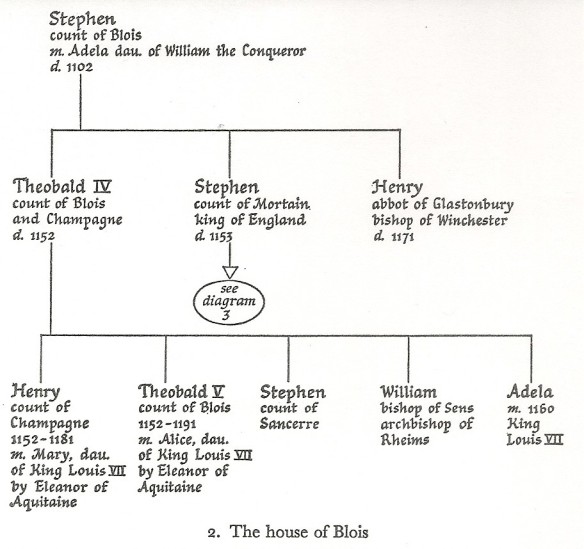 The next table is by Jim Bradbury, Stephen and Matilda:

One Medieval historian who was born around 1085 may have actually seen Rufus. The monk-historian wrote a description of the king:

He was squarely built, with a ruddy [red] complexion, light blond hair swept back so as to leave his forehead clear, his sparkling eyes speckled with gleaming flecks, physically strong despite his modest height, but somewhat paunchy … In public and in assemblies his bearing was haughty and stiff. He would stare at people with a menacing look in his eyes and intimidate those he was speaking to by adopting a harsh tone and a studied severity.

In private and in the chamber with his friends he was easy-going and relied a great deal on joking. He was in particular a most eloquent critic of his own mistakes, ensuring thereby that any resentment at what he had done dissolved into laughter (qtd. in Gillingham 12-13)

(They lived before Henry II, Plantagenet, below)

Ian Crofton, The Kings and Queens of England (Metro Books, 2006).

David Crouch, The Normans: The History of the Dynasty (Hambledon and London, 2002).