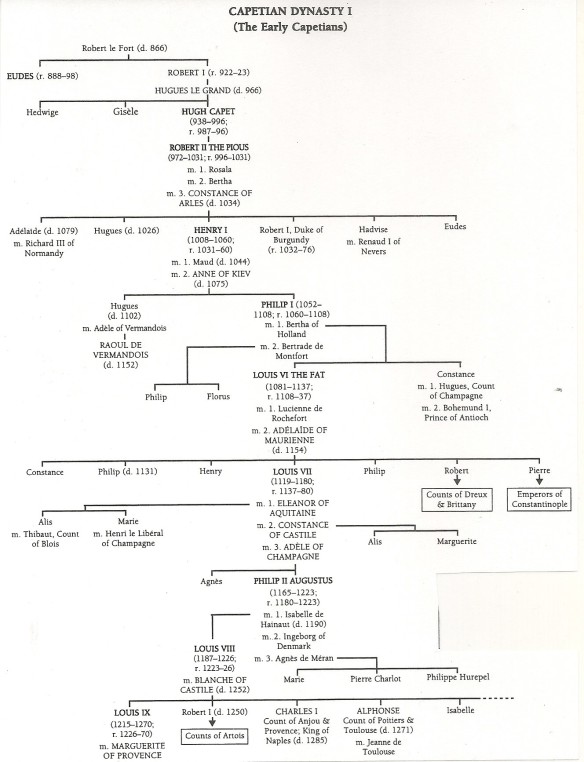 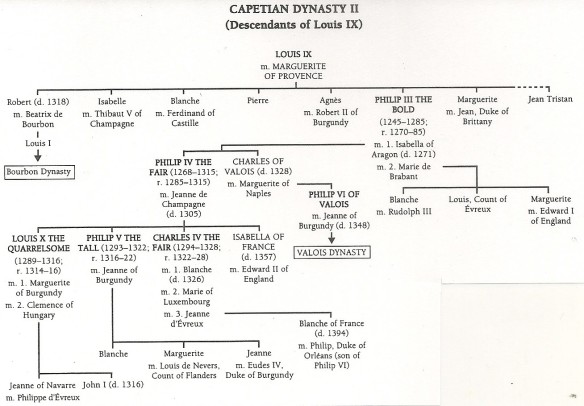 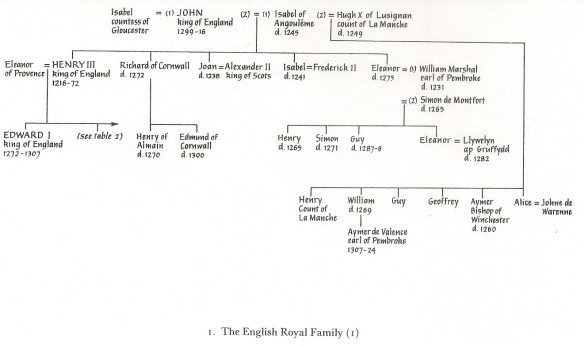 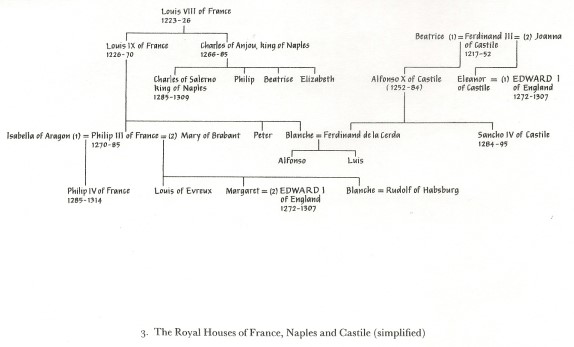 Philip III is viewed by scholars today as a transitional figure.

He was born at Poissy 1 May 1245. His mother Marguerite of Provence was influential in his life as a boy. He became king while on crusade with his father Louis IX, who died of illness outside Tunis, during s siege. So Philip was the first who began his reign on the death of his predecessor rather than a coronation, which was delayed until 15 or 30 Aug 1271 at Reims.

(1) He married on 6 July 1262 Isabella of Aragon, daughter of Jaime I, King of Aragon, Majorca, Valencia, Count of Barcelona and Urgel, seigneur of Montpellier, by his second wife Jolanta (or Yolanda). She was born about 1247.

They had four sons: Louis (died young); Philip (IV), future King of France; Robert; and Charles, Count of Valois, who married (1) Marguerite or Margaret of Sicily and (2) Catherine of Courtenay, titular Empress of Constantinople; and (3) Mahaut of Chatillon.

(2) By contract dated 21 Aug 1274, Philip III married Marie of Brabant, though he seemed to have a dislike for her, perhaps because of bad rumors spread by a former councilor of his father, who was subsequently executed for treason in 1278. She was the daughter of Henry III, Duke of Lorraine and Brabant by Alix (Alice), daughter of Hugues (Hugh) IV, Duke of Burgundy. She was born at Louvain, probably in 1256 and crowned in the Sainte Chapel of the Palais Royale at Paris 24 June 1275.

They had one son: Louis, Count of Evreux, who married by contract dated Feb 1304 Marguerite of Artois; and two daughters: Margaret or Marguerite (wife of Edward I of England) and Blanche (wife of Rudolph III, Duke of Austria, King of Bohemia).

It was alleged that Marie wanted to replace Philip by his first marriage with her own offspring, Louis. She may have even poisoned Philip IV’s older brother who died in 1276, shortly before the death of his third brother, but the allegations were unproven.

His reign was more of a hiatus in the gradual climb of the monarchy to acquire more power, but he achieved some success. The deaths of his childless uncle and aunt Alphonse of Poitiers and Jeanne or Joan of Toulouse in 1271 on his return from the crusade brought the south of France into royal domain. In the 1270s Philip intervened in Navarre when a succession crisis threatened French interests. Further, since the King of Aragon had supported the Sicilian rebels against Charles Count of Anjou and King of Naples, Philip’s uncle, (Sicilian Vespers in 1282), Philip went on a crusade of sorts against Aragon, but having crossed the Pyrenees in 1285, he was badly defeated.

During the retreat Philip III died on 5 Oct 1285 at Perpignan and was buried in the Abbey church of Saint Denis. His son Philip IV was just 17.

Philip III’s widow Marie died testate at Murel near Meulan (Yvelines) 12 (or 10) Jan 1321/2 and was buried in the church of the Franciscans at Paris.