This is the most important and well-known verse in the Bible, but do we consider what that phrase means?

Ultimately the interrelations of the two persons of the Father and the Son in the one God is a mystery, but John 3:16 needs to be opened up.

The key word in John 3:16 is monogenēs (pronounced moh-noh-gen-ace, and the “g” is hard as in “get.”) in Greek, which had been traditionally translated as “only begotten” because the prefix mon– means “only” or “alone” or “unique.”

So what does monogenēs mean?

Some theologians, like Berkoff (p. 89, 93-94) and Frame (pp. 490-96) and the authors of the Nicene creed seem to believe that begotten means that the Father eternally generates the Son. It is vital to say eternally generates because the Scriptures affirm that the Son does not have a beginning. It’s a Father-Son eternal relationship in the Godhead, which is not similar to the human father and human son, both of whom have a beginning.

Frame suggests, humbly, that begetting is connected with the Son becoming man or the incarnation.

Thus the fact that Jesus was begotten and born in history does give us some hints as to his eternal nature. His earthly begetting images something of his eternal relationship with the Father. I suggest that perhaps the phrase eternal generation could be taken to designate that parallel. To say that the Son is eternally generated from the Father is to say that something about his eternal nature makes it appropriate for him to be begotten in time. (p. 494, emphasis original)

Translation: It’s a parallel. Begetting in eternal heaven without beginning or creating the Son is like the Son conceived by the Spirit in the womb of Mary on temporal earth. Warning! This earthly begetting had a beginning. However, the eternal begetting has no beginning, by definition, because it is eternal. But Frame’s point is that the term “Son” has something built into it that communicates “begetting.” (I think he has caught something of the meaning of Son.)

What is begotten and proceeds from the Father is not essence but personhood. The begetting and proceeding are eternal; hence the relationship is one that inheres within one divine reality. This is sometimes referred to as the perichoresis (or “coinherence”) of the persons, so that the three persons are said to be in and to interpenetrate one another. Each of the persons accordingly contains the whole of the Godhead and is one divided God.

The main point to the excerpt, besides learning the new word perichōresis (literally “rotation”), is that the essence or shared nature is not begotten or proceeded, but the person of the Son and the person of Spirit are. This makes sense to me because the persons of God are distinct and in relationship with each other. And if the Son’s essence were begotten, then he would not quite be on the same level as the Father’s essence. The Son would not be “true” and “perfect” God.

The term perichōresis means the close relationship of the persons. I like the idea of relationship in the Trinity. That’s what matters to me as a human.

Here is an illustration of perichōresis: 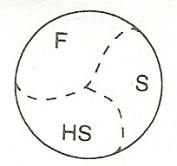 Note that three persons (F, S, HS or Father, Son, and Holy Spirit) are within one God, sharing the same essence. The one God (= the circle), monotheism, and all three persons are contained in it. Each person is equal to the whole being of God. The dotted lines keep the the persons distinct, but they also are dotted to indicate interpersonal relationship between the three persons. The substance is not divided, but shared by all three persons, equally (Grudem, Systematic Theology, p. 321, Fig. 14.4).

It is a visual to understand the Trinity, but as usual, don’t push illustrations too far. They are merely designed to help guard against misunderstanding and to clarify.

Beyond this idea, I don’t wish to go. Let’s keep things simple. And now let’s move on.

Jesus is revealed in the New Testament as the Son, when he was born. As the Son, it was he who was by divine decree chosen to be born on this planet and in human time. The Father ordained his earthly birth. The word Son seems appropriate and suitable to that calling, even though he was the Son from eternity past.

See my post: When Did Jesus “Become” the Son of God?

However, the professional theologians tell us that details of the divine generation (and proceeding) are forever hidden in that God relationship.

However, Grudem and Moody say that new research shows that the word more accurately means “one-of-a-kind” or “unique” or “in a class by itself” and has nothing to do with begetting or generating. The New American Standard Bible says in the margin at John 3:16 “unique, only one of his kind.” The New Revised Standard Version translates it as “only Son.” The NIV: “one and only Son.”

“The only begotten does not suggest a coming into existence, but rather it expresses the uniqueness of the person. Christ was unique as the Son of God, sent by the Father from heaven” (Moody p. 210, emphasis original)

So Jesus is one-of-a-kind who belongs in a class by himself. Therefore the idea of the Son’s eternal generation by the Father is removed, and the interpretation of John 3:16 is simplified and clarified. (Note: In Grudem’s second edition, he now accepts the eternal generation of the Son.)

My choice: Frame’s ideas are very appealing, but if Grudem and Moody find the evidence, then so be it. If forced to choose, however, Frame is my preference—for now. But Frame is quick to point out that since we are not clear, we should not declare each other heretics or outside of orthodoxy.

What is the bottom line?

I like what Frame says of “begotten.” “‘Begotten’ is little more than a synonym for “Son” (p. 494). In affirming we don’t know the details, Frame also says, “A certain amount of reverent agnosticism is appropriate here” (p. 495). No, this is not agnosticism that doubts God’s existence, but the kind of agnosticism that keeps quiet about such heavenly matters like eternal generation or being begotten.

Personally, I like to simplify things. The Scriptures reveal the Father and the Son, not to give us a headache, but so we can relate to them. We can have a personal relationship with the Father as intimately (and more so) as we have with our own father. And we can relate to the Son as the Messiah and Lord, who has a unique relationship with the Father. The Son reveals the Father. The title Father is more personal and revealing than “God.”

Bottom line: let’s have a relationship with the Father and the Son (and the Holy Spirit), since they are revealed in Scripture in those two persons (and the third person of the Spirit), for our relational benefit.

So how does knowing about the Trinity help me know God better?

Here is an entire ten-point post that answers that question:

The Trinity: What Does He Mean to Me?

When Did Jesus “Become” the Son of God?

ARTICLES IN THE TRIUNITY SERIES

The Trinity: What Are the Basics?

The Trinity: What Are Some Illustrations?

The Trinity: What Does the Old Testament Say?

The Trinity: Three Persons Together in the New Testament

The Trinity: What Do Theologians Say?

The Trinity: What Are His Roles in Creation and Redemption?

The Trinity: What Does ‘Only Begotten Son’ Mean in John 3:16?

The Trinity: What Do Arians and Jehovah’s Witnesses Teach?

The Trinity: What Are Defective Ideas?

The Trinity: What Are Replies to Objections?

The Trinity: Why Would God Seem So Complicated?

The Trinity: What Does He Mean to Me?

Elmer Towns came up with this table, which shows that each person of the Trinity shares the same attributes as one God:

Elmer Towns came up with this table too, which shows all three persons doing works that only God can: