Her older half-sister, Queen Mary, imprisoned her in the Tower of London. She asked if the scaffold was still up, where Lady Jane Grey, the Queen of Nine Days, was beheaded. Terrifying for her.

She was extremely intelligent and well educated—reaching genius levels in languages. Seriously. But how did she get on with her younger half-brother, King Edward, and older half-sister, Queen Mary?

Let’s begin with one genealogical table to get the big picture.

The dynastic storyline is not complicated. The Tudor monarchs died out because she never married and produced an heir. She was England’s virgin queen.

Please click on her grandfather Henry VII’s post for many more genealogical tables that go back the Plantagenets. 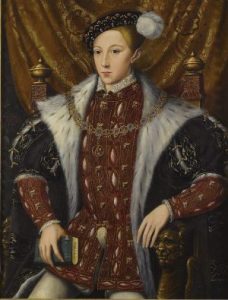 FROM BABY TO TEENAGER

G. J. Meyer, The Tudors: The Most Complete Story of England’s Most Notorious Dynasty (Bantam, 2011).